Here in Greenville, our team members at Premier Digital Displays are here to make political advertising easier and more manageable. 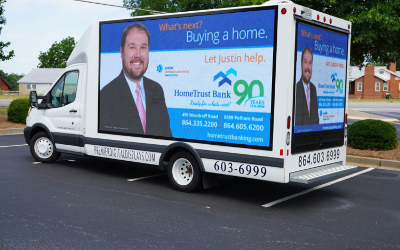 While it’s a positive thought to believe that people vote strictly based on their beliefs and values, the reality is that many voters are simply basing their decisions off of what they’ve heard during the campaign process. Political advertising is such an important aspect of a campaign strategy and vital to furthering your cause, but it must be handled properly to reach the right audience.

In this country, we have so much freedom when it comes to what choices we make every day, ranging from our political views and how we vote to what brand of clothing we buy. Even small things like choosing a restaurant for lunch might be influenced by advertising, so it’s clear that these initiatives modify the way we live our lives. Seeing political advertisements makes a major impact on the way people feel about candidates and/or issues, as well as how they will ultimately vote.

Here in Greenville, South Carolina, our team members at Premier Digital Displays are here to make political advertising easier and more manageable. We start by working with your team to better understand the messages that you want to convey to voters. Political advertising allows candidates to promote themselves and what they stand for in ways that are smart and appealing and can be universally understood. Our role at Premier Digital Displays is to get that messaging out into your community in a variety of ways, such as on billboards, three digital LED displays located throughout the area, and geo-target advertising to get specific items to various audiences. We’ll even handle unlimited changes to your advertising campaigns for free!